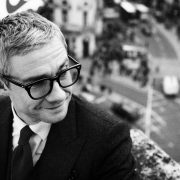 Joe Mills is a hugely respected session stylist for men’s hair, regularly working with magazines and celebrities on editorial, film and project work. His salon, The Lounge Soho, has recently celebrated its 20th anniversary, with the Joe and Co barbershop in Soho offering an informal but immaculate grooming space. Joe was recently nominated for GQ’s Barber of the Year and Barbershop of the Year at the British Hairdressing Business Awards, and has launched his new brand, MILLS, in select Primark stores.